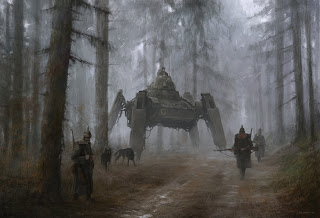 Once again, what is Event Based Narrative Traction?

Again, this comes down to what the readers wants, so the first step is creating that want, and creating it strongly enough that the reader sits through your entire book to get it. As in my last post on Informational Narrative traction, I have found some examples of Event Based Narrative Traction. These were a bit trickier to find for two reasons. Firstly, because to want an event to happen, you usually have to know something about the plot, characters and setting, so it was hard to find examples that made sense and secondly, it is quite tricky to find event based examples of traction that aren't quite long. They require a lot more set up.

First up, we have 'Captive Prince' by C.S Pacat (who taught me about narrative traction in the first place!):

"I hear the King of Akielos has sent me a gift," said the young man, who was Laurent, Prince of Vere. "An Akielon grovelling on its knees. How fitting."
Around him, Damen was aware of the attention of courtiers, gathered to witness the Prince's receipt of his slave. Laurent had stopped dead the moment he had seen Damen, his face turning white as though in reaction to a slap, or an insult. Damen's view, half-truncated by the short chain at his neck, had been enough to see that. But Laurent's expression had shuttered quickly.
That he was only one of a larger consignment of slaves was something Damen had guessed, and the murmurs from the two courtiers nearest him confirmed it, gratingly. Laurent's eyes were passing over him, as though viewing merchandise. Damen felt a muscle slide in his jaw.
Councillor Guion spoke. "He is intended as a pleasure slave, but he isn't trained. Kasor suggested that you might like to break him at your leisure."
"I'm not desperate enough that I have to soil myself with filth," Said Laurent.
"Yes, Your Highness."
"Break him on the cross. I believe that will discharge my obligation to the King of Akielos."
"Yes, Your Highness."

What is implied could happen here? What do we want to see happen? There are a few key phrases. Firstly, 'He is intended as a pleasure slave' and secondly 'Break him on the cross'. We're not sure exactly what is going to happen to Damen, but we know he is helpless, a slaved and chained up, and we know it is going to be violent. Within the context of the story, there is already a lot more going on. This scene acts to pile on several other elements of event based narrative traction, since the over-arcing plot of the trilogy is Damen's drive to get home and get revenge on his brother for usurping him and selling him as a slave to the enemy. This is an example of a secondary traction arc, to carry us over the next few chapters as we find out of Damen will be turned into a pleasure slave or whipped on the cross.

Here is another example from 'Triptych' by Karin Slaughter:

Everything Will Trent said and did grated on Michael's nerves, from his 'of course,' when Michael said he would drive to the way he stared blankly out the car window as they travelled up North Avenue toward the Homes. The GBI agent reminded him of those geeky kids in high school, the ones who kept slide rules in their breast pockets and quotes obscure lines from Monty Python. No matter how many times he watched it, Michael still didn't get Monty Python and he sure as shit didn't get geeks like Trent. There was a reason those guys got the shit beaten out of them in school. There was a reason it was guys like Michael doing the beating.

Again, this promises pending violence. We can see from the hostility Michael feels for Trent, that there is going to be some sort of conflict or climax between them—either soon, or later in the book. Michael wants to hurt Trent, not just hurt him, but bully him like he did the other geeks in school. He sees this as his right. And if you're reading Karin Slaughter, it's because you want to see these kinds of conflicts play out.

Now for something a bit lighter. From my all time favourite trilogy, 'Leviathan' by Scott Westerfeld:

Since getting on the bus with Jaspert, Deryn's skin had itched with wondering what she looked like to strangers. Could they see through her boy's slops and shorn hair? Did they really think she was a young recruit on his way to the Air Proving Grounds? Or did she look like some lassie with a few screws loose, playing dress-up in her brother's old clothes?

This tells us Deryn is a girl, dressing as a boy, to join the air force. We know, somewhere in the future, she is going to get caught and it will have serious repercussions. That is the promise being made to the reader with this set up. We want to keep reading, because we want to see how that happens and what the consequences are.

And finally, we have a snippet from 'The Blade Itself' by Joe Abercrombie:

And here it is. That horrible, beautiful, stretched out moment between stubbing your toe and feeling the hurt. How long do I have before the pain comes? How bad will it be when it does? Gasping, slack-jawed at the foot of the steps, Glokta felt a tingling of anticipation. Here it comes…

This is an example of more immediate narrative traction. Obviously, a toe stubbing can't be drawn out over a whole novel. Or even a few pages. That pain is going to hit in the next paragraph. However still we can fell that pull, that traction, driving us forward to witness the explosion of pain he is about to suffer.