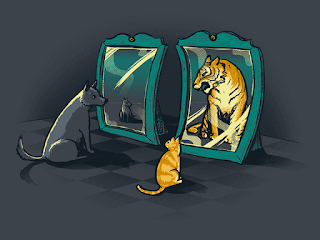 I want to tell you three stories about perspective. Because often we choose the perspective that makes us the unhappiest. We go looking for unhappiness like pigs seeking truffles and I want to talk about why.

So first, the three stories:

Story 1
When I was seventeen, I saw a really cute guy on crutches. He was about my age and had really sexy messy blonde hair and freckles. I kept watching him, hoping he would look my way and I could smile at him, which he did. However, when he caught me looking he scowled, hurt and furious. It was only when I saw how savagely he reacted, and how close to tears he looked, I realised he was on crutches because he'd had a leg amputated. Fairly recently, judging by the bandages.

I wanted to go over and explain, but he was with friends and I was with my mother. However, I still think about that guy who felt self-conscious and assumed I was staring for the complete wrong reason.

Story 2
I was doing a dance performance in Brisbane with a Bollywood dance class. One of the girls was wearing a neon pink outfit. It really was blinding. Pretty, but very bright. I didn't know the way to where we were preforming and the girl in pink assured me she did. I said that was good, because she would be easy to find in a crowd.

She flinched, and looked completely broken-hearted. I was baffled.

"Because I am so tall," she said softly.

"No," I said. "Because that outfit can be seen from space."

Story 3
Between 2008 and 2010 I lost twenty kilograms and I have kept it off. I was talking to a friend about it and she said something like: 'You're not really qualified to talk about losing a lot of weight though.' I was hurt and furious, thinking she was implying I was still too fat to talk about being thin. When I complained to another friend about the comment the next day, they suggested from the context that perhaps my other friend had been trying to say that even at my heaviest, I wasn't that overweight. It had been a compliment not an insult, and I had walked away angry.

Instinct Is Powerful, But Sometimes Wrong

We are all instinctively defensive. The person who insults you is not likely to protect you from the sabretooth tiger and humans are a highly gregarious species. We are very tuned in to communication. However, it is more beneficial to be aware of hostility than love, from a survival perspective. Mistaking love for hostility probably won't kill you, mistaking hostility for love could be fatal in thousands of ways.

Sometimes, people who genuinely mean well are being misunderstood to our detriment because of this. Please note, I am not talking about 'tough love' here. Calling someone a loser because you want them to try harder is not a 'misunderstanding'. Its hurtful, lazy and its been proven time and time again that it doesn't work. You're not doing it because you love them, you're doing it because you want them to change, but you're too lazy to be constructively supportive.

But I am talking about always assuming the worst. Language and body language are nuanced and sometimes we leap to assumptions based on our feelings and insecurities. Imagine if, without any doubt, you knew all those times you had caught someone staring and felt fat or ugly, that it was really because they were attracted to you? How much would your life change if you found out the negative attention you received was actually positive?

I'm not saying it all is. If some creepy guy is leering at you, he's probably a creepy guy. But the woman who seems to be looking at you disapprovingly may really love your handbag and have bitchy resting face.

Realistically, how often are you staring at someone because you think they look awful? Maybe it’s a lot. Maybe you're an asshole. How often do you stare at people because you love their clothes or hair or think they are beautiful? Being stared at is often uncomfortable, but that doesn't mean its hostile or judgemental.

Likewise, what seems like a comment about your deepest insecurity might not be. My beautiful dancing friend thought I was talking about her height because she felt insecure about it. I'd never really noticed because, well, I am short. Everyone is taller than me. How much taller is just semantics.

You Don't See What Other People See

Whatever you are most insecure about could be invisible to the people around you. I have a huge insecurity about my physical appearance (nothing to do with gender). I feel like it is the most obvious, glaring, unavoidable flaw whenever people look at me. No one has ever mentioned it to me though. No one has ever commented on it.

Am I too intimidating to insult, or am I the only one who sees it? We'll probably never know, because I am unlikely to ever admit what it is.

But if you look at me and don't instantly know what I am talking about, maybe, just maybe, whatever flaw you think other people can't look away from is invisible to most people too.

Small changes in perspective and belief can make a big difference to our happiness.

And happiness is what I want to talk about going forward. I know this is a pretty big deviation from my usual writing and chronic illness topics, but for the next ten or so weeks, I am launching a happiness project.

My aim is to write a practical, reasonable approach to being happier. One that is appropriate for millennials and Gen Y. One that says 'fuck off' to the law of attraction, positive thinking and any 'happiness' technique that punishes you for not 'thinking correctly'.

This will partially be a recording of my own personal efforts and journey, but I hope—as I always do—that my blog posts on the matter will be helpful to the rest of you as well, because I love you people. <3