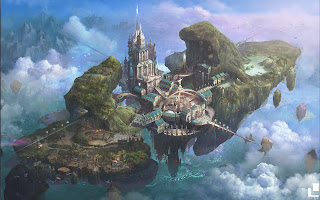 Once again, what is Informational Narrative Traction?

One of my favourite opening paragraphs is from China Mieville's short story 'Go Between'.

'Something was in the bread. Morley was cutting, and on the fourth strike of the knife, the metal braked. Behind him his friends talked over their food. Morley prised the dough apart and touched something smooth. He'd marked it with a scratch. Morley could see the things colour, a drab charcoal. He frowned. It had been a long time since this happened.'

In this story, we get the answer of what is in the bread reasonably quickly. It is a message. The question then becomes how the messages get into products Morley buys, and what effect following the instructions on the message has. Are they important? Is he effecting world events? Is he working for good or evil?

You end the story with more questions hanging than answered, nonetheless it is a riveting read. You'll find most of China's body of work is good at asking questions and less good at answering them, but personally that is part of the appeal for me.

The important thing is, he presents something you want to know, then in giving you the answer (what is in the bread) he gives you are lot more questions (how did it get there and why).

To look at another example, on the first page of 'Zeroes' by Scott Westerfeld, Margo Lannagan and Deborah Biancotti, we have these few lines:

'He drank some more coffee. Still crap. At least the bitter java gave him a reason to seem jumpy. Nobody would look at him and say, 'Hey, that kid is real jumpy. Must have something to do with the army green duffle bag under his feet.' Nope. Nobody would blame the bag.'

Since this is a novel, we can draw out the question a bit longer. Since Zeroes is told from the perspective of six alternating POVs, we get to meet several more characters and get introduced to their informational or event based traction before we even get to find out what is in the bag. Though, unfortunately in my ARC of the book, what is in the bag is listed clearly in the book blurb.

The Hunger Games has a similar problem, whereby one of the early informational traction items is the question 'what is the reaping'. However, the blurb clearly gives you that information before you begin reading. Which is perhaps why I found it difficult to get into the hunger games until the names were pulled from the cup and Suzanne Collins started to subvert our expectations.

And our final example, comes from the opening paragraphs of 'Day Boy' by Trent Jamieson:

'Every story should start with a fight. Fist bunched, all knuckles, blood in the mouth and laughter. Every story should start with a hand clenched around a bit of chalk, making the circle of the seven upon a front door. A door that can't be locked on any account. The sun I draw it in chalk. I draw it simply (a circle the size of my palm, the seven lines that radiate from it) in the style of the Day Boys. Big enough that there is no mistaking it. That sun means my Master is coming to see you: coming for his measure of blood. Your door will open, and he will enter, talk awhile, if the mood takes him, and then he will drink.'

This is so dense with questions, it's hard to know where to begin. It’s a fantastic opening. It tells us a little about the personality of the main character and the setting, it has a very strong voice. But it gives us so many things we want to know.

What sort of character is he that he thinks stories should start with a fight? Who are the Day Boys? Why can't doors be locked? Why is all this allowed to happen? What is the Master? What is the relationship between the Master and everyone else in the town, that they have no choice but let him in to drink, but then he might stop to talk to you before he feeds?

We know already it is a novel about violence and control, but we keep reading easily to learn more. To answer all those questions.

It's worth remembering what I said in my last post in this series: "Escalation, stakes, motives and plot are WHAT and WHY things are happening, NARRATIVE TENSION is HOW you tell the reader those things and WHEN."

In all of these examples, then 'when' is right at the start of the story or novel. However, keep in mind two things. 1) a lot of the examples are at the start because I didn't want to flick through entire novels to find good examples and 2) the start of novels don't require context to make sense, thus are better examples if you haven't read the books I am using.

The how, in the most basic sense, is just hinting to the reader there is something they don't know:

-  Something was in the bread.
- 'Hey, that kid is real jumpy. Must have something to do with the army green duffle bag under his feet.'
- That sun means my Master is coming to see you: coming for his measure of blood.

(Trent's example is subtler than the others, which is probably why Day Boy won all those awards.)

Also, to stay on top of updates, follow me on twitter and facebook, or subscribe to this blog (just use the widget to the right of this panel).
Posted by Jake Corvus at 3:00 AM